New York, New York … a town so great they had to name it twice! FramedArt.com offers nearly a thousand different New York City Skyline images, in a variety of sizes and formats. You’ll find a wide array of panoramic NYC skyline photographs from every angle around Manhattan Island, with a number of the photos pre-dating September 11th, 2001. Every time of day is portrayed: from dawn through midday, to dusk, evening and into the wee hours. A multitude of Manhattan’s most famous skyscrapers is represented, including the Empire State Building, the Chrysler Building, the World Trade Center’s Twin Towers, and the Freedom Tower.

Backlit by a gorgeous purple sunset, the skyscrapers of Manhattan glisten in his stunning panoramic photograph of the Brooklyn Bridge and the New York City Skyline by Richard Sisk. The South Street Seaport glows at the river’s edge, while the skyscrapers cast cool aqua reflections on the water. The World Trade Center’s Twin Towers stand tall in the foreground, with the Chrysler Building and Empire State Building peeking out from the background. 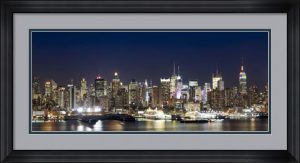 Midtown Manhattan glitters spectacularly in this waterfront view across the Hudson River at dusk. A dramatically lit Empire State Building shines in hues of green, purple, and orange against a dark blue nighttime sky. A cruise ship is docked at the piers, while the USS Intrepid anchors the right corner of this magnificent skyline image. 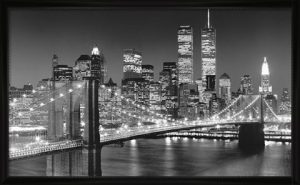 The World Trade Center’s Twin Towers and the Brooklyn Bridge dominate this dramatic black and white photograph of the pre-9/11 New York City skyline by Henri Silberman. With its 73” x 44” dimensions, this jumbo-sized print commands a significant amount of wall space. It’s ideal for large rooms. While Henri Silberman was born in Paris in 1951, he spent most of his life living in Brooklyn. The FramedArt.com gallery includes many of his striking images of New York City’s most recognizable buildings and bridges.

This gorgeous aerial panoramic image of the New York City Skyline was shot from above and from the Southwest, with a view of Midtown. The skyline includes the Pan Am building and the Chrysler building, with the East River and Brooklyn to the Northeast. The “magic hour” lighting is splendid. Although the exact date of the photograph isn’t noted, the Pan Am building’s signage provides a clue; it was changed at some point after September 1992, as reported by the New York Times. 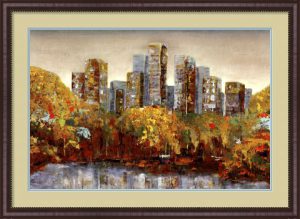 Central Park is in peak color in this gorgeous impressionist painting by Carmen Dolce. The trees are ablaze in a dazzling warm range of yellow, orange, and red, with mirror-like reflections on the lake. Manhattans skyscrapers loom behind the trees, with a dreamy, overcast sky. Carmen was born in Tuscany, and spent her early childhood years there, before moving Sudbury Ontario, Canada. She is best known for her landscapes and abstracts.

There’s nothing like a New York City sunset and this remarkable panoramic photograph of the skyline pairs a unique airborne perspective with a delicious color palette. The Empire State Building, Chrysler Building, and MetLife building glitter among the skyscrapers in the foreground, against a breathtaking sunset with a sweep of color, from purple to orange to deep yellow. The Hudson River and the New Jersey shore bask in purple and gold. The FramedArt.com collection includes over four dozen works by Richard Berenholtz.

Perspective is everything, or so they say, and this remarkable Brooklyn Bridge panoramic sepia print by Shelly Lake drives home the point. A unique view straight down the top of Brooklyn Bridge into Manhattan is dominated by the downtown skyscrapers on the left, with the expanse of open air above Chelsea and its surrounding neighborhoods on the right. This image is available as a conventional color print, as well. Shelly’s color work is notable for its vibrancy and impact. 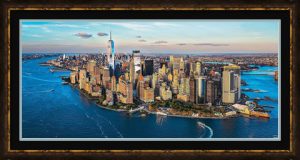 Magic Hour is all about the moment, and this stunning NYC panoramic photograph captures downtown Manhattan in all its glory. Shot from the air, from near due South, the island glows in golds and oranges with a touch of red. The crystal-like Freedom Tower dwarfs the Financial District’s skyscrapers, as the Hudson and East Rivers bustle with activity. Philip Plisson was born in France and is best known for his maritime photography. 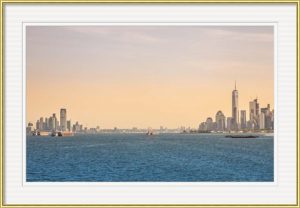 This dreamy photography by Van Tsao delivers a unique view of downtown Manhattan, as seen from Sandy Hook, New Jersey. NYC’s skyline holds down just a slice of the image at the right, and is echoed at the left by an even more modest slice of Jersey City’s “Gold Coast.” The image is dominated by the expanse of sky and the open bay, as it runs north into the Hudson River. The New York City skyline is one of Van’s most frequent subjects. Van was born and raised in Jackson Heights, Queens. The FramedArt.com gallery currently contains over three dozen of his photographs. 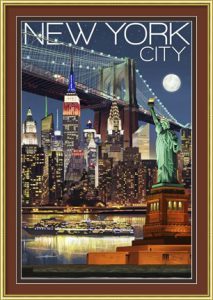 This whimsical and vibrant composition by Lantern Press contains many of New York City’s most famous landmarks. The Statue of Liberty stands tall in the foreground, with the Empire State Building proudly lit in red, white, and blue. The Chrysler Building’s Art Deco crown and the Brooklyn Bridge are well represented. The skyline is set against a deep blue sky as a cruise ship makes its way up the river. And last but not least, the full moon is as big as a pizza pie. Who could ask for anything more? 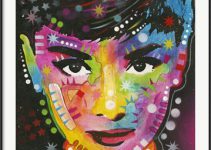 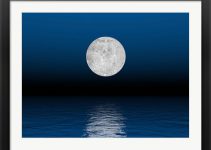 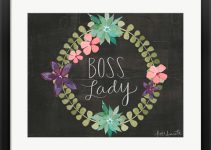